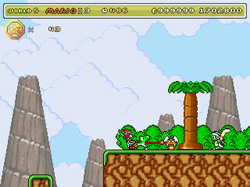 Congratulations for beating SMB2011, but your quest isn't over just YET. Many great things will happen once you beat the
game, you unlock the Special World, consisting of 5 more levels to play. Meaning the game has not 45 Shadow Medals
but 50 of them. In this level, grab Yoshi and reach the other side of the mountain. A fun level. 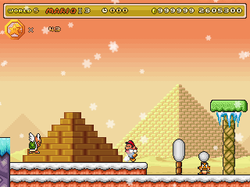 A mash mixture of desert and snow level. This level introduces the angry sun from Super Mario Bros 3, mixtures of ice
and sand, and more to explore. 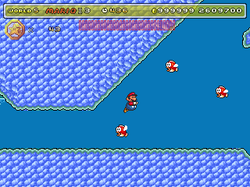 This level introduces a very special ad-in to the game. The purple coin challenge IS ON! Collect 100 purple coins in the
dark section of the maze and make your way over to an underwater portion of the level. Yoshi is in this level too. 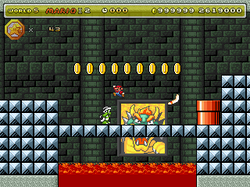 In this level, level designers came together and added one section each along with their username written in coins.
BuzzNBen (me), takes the first section, Karate Cat takes the second section, sspp03 takes the third section, making this
Fort Bro. 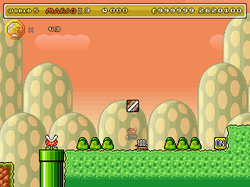 The last level of the game, also one of the hardest, This level is like Super Mario Galaxy 2's Perfect Run. You are given one mushroom at the beginning of the level and no items throughout the level. Some remakes of previously played levels are put into this one giant level. It only gets harder per section.

Boss: None
Exit: Daredevil
After you have completed "The Perfect Run",  Four options await you, you can, Stock on lives from the 1up factor, you can, watch the Credits, you can
visit World D, the Developer Subspace world, where some unused stuff, and such is, and/or get tips on playing levels. Thank you for playing SMB2011.